All the main attractions such as the Acropolis, Plaka, the Ancient Agora, Keramikos, the Herod of Atticus theatre, the new Acropolis museum, the National archaeological museum and many more are all within walking distance. Ermou street, the main shopping street and the greek parliament are also close to the hotel.

Psirri neighborhood is a historical and one of the oldest neighborhoods of Athens, full of shops with tasteful and aromatic herbs and spices, cured meat, Greek cheeses, etc… The central market of Athens is just a block away. You can then figure out why many of the best traditional restaurants in Athens are located in Psirri.

Psirri was also renown in the old days for its artisans workshops, tanners, typographers. Today, Psirri is arty and bohemian and the few that are left harmonically coexists with alternative venues and bars, Street art, galleries, vintage shops and concept stores!

…and a few words on Euripides, the man:

Euripides was one of the three great tragedians of classical Athens, the other two being Aeschylus and Sophocles.
Euripides is identified with theatrical innovations that have profoundly influenced drama down to modern times, especially in the representation of traditional, mythical heroes as ordinary people in extraordinary circumstances. 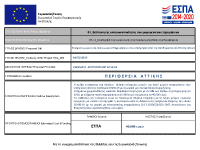